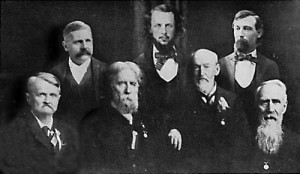 Benjamin Piatt Runkle – Courageous in Spirit and Idealism – Runkle was born in West Liberty, Ohio. At the mere age of 18 he led the DKE rebellion and placed the seed of revolution in the minds of Bell, Caldwell, Cooper, Jordan, and Scobey when he threw down his DKE badge in disgust. He bonded with Lockwood to design the White Cross. He took his idea for the White Cross from divine vision of Constantine before the Battle of the Milvian Bridge. He was so endeared to his cross design that he engaged in fisticuffs with someone who sneered at his pin. Due to his valiant efforts on the battlefield in the Civil war he won over his enemies, earning a tribute to him from his former counterpart, Whitehall Reid. He died on the 61st birthday of the Fraternity.

Thomas Cowan Bell – The Qualities of Learning – Bell was born in the town of Dayton, Ohio. He was 23 when he founded Sigma Chi. He believed deeply in scholarship and friendship. After his graduation he became a teacher and worked his way up to Superintendent of School of Nobles County Minnesota. He is the inspiration for scholarship in the fraternity.

William Lewis Lockwood – Honest and Trustworthy Through Life – Like Runkle, Lockwood was 18 at the time he entered the circle of founders. He was the only founder who was not a member of DKE. He was the businessman of the Fraternity and his organizational skills were the reason the fraternity stayed afloat during the early years. He was the first of the Founders to perish, in 1867. He is the driving force behind our well drawn out guidelines and devotion to being a well run and organized Fraternity.

Issac M. Jordan – Energetic and Faithful to Every Task – Jordan was born in central Pennsylvania, and was 20 when helped found Sigma Chi. He created the Jordan Standard in 1884, a document with which the criteria for entry into the Fraternity is based. After he left Old Miami he studied law and became a lawyer in Cincinnati. He was later elected to US Congress.

Daniel William Cooper – Ruler of the Spirit – Cooper was born near Frederickstown, Ohio. He was 25 at the time of the Founding. Being an ordained minister he was the driving force behind the religious implications in the Fraternity. He was the last Founder to die, in 1920 at the age of 91. He was so devoted to his fraternity that he wore his Sigma Chi pin until his death.

Franklin Howard Scobey – Courteous and Loyal In His Friendship – Scobey was born in Hamilton, Ohio. Though 18 at the time he was the driving force behind the Spirit of Sigma Chi. He was of different beliefs of many of the other founders but none the less they opened their mind to his ideas. He was in contrast to Lockwood the most, but the two became such good friends that Lockwood named his son Frank. He died in 1888.

James Parks Caldwell – True to Principle – Caldwell, at a mere 14 years of age became one of the Founders. He was born in Monroe, Ohio, and was a child prodigy. Caldwell was best known for his spirit of youth and creative genius. At the age of 16 he graduated from Old Miami and enlisted in the Confederate Army, when he was then taken captive in the Civil War. He died a lifelong bachelor in the year 1912.